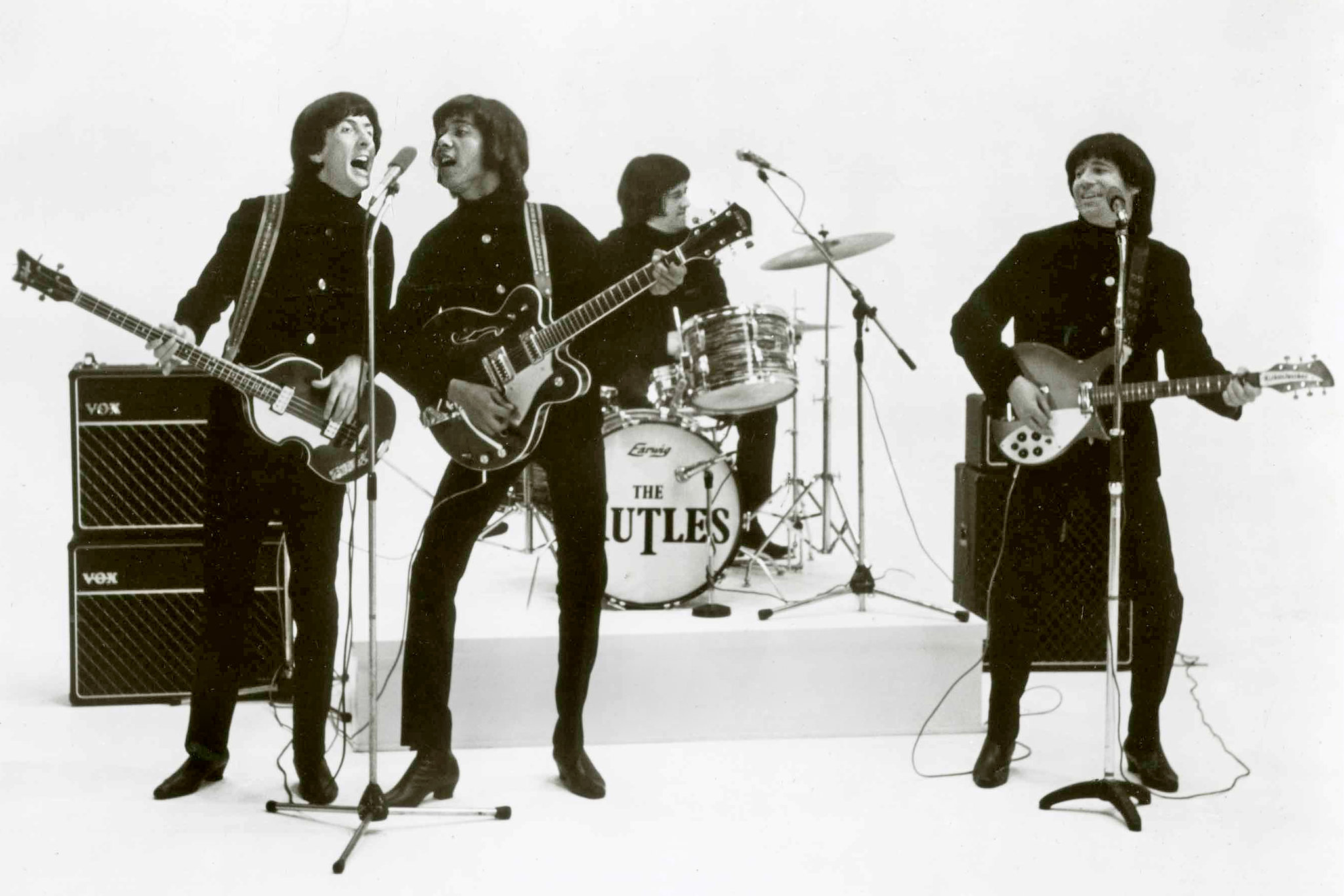 Here is part 2 of a multi-part series I want to do about some interesting Beatlesque music.  Last month was part 1 and if you missed it, please go back and start there as it talks about what that sort of music means.  Years ago when I used to play some of the pop music I purchased from places like Bruce Brodeen’s Not Lame website for my drummer pal Dan Campbell, he made the astute comment that nobody combined both of the main facets musically that The Beatles did.  What he meant was that they could play screaming rock and roll on one song then a gentle ballad on the next and do so with equal skill.  There is a fine line too between saccharine and sweet.  At any rate, here are 20 more songs reminiscent of the music of the Fab Four.

Where Monty Python’s Eric Idle and other comic greats combine with musicians the like of Mick Jagger and even George Harrison to make a funny TV movie of the story of The Beatles er Rutles (All You Need Is Cash).  We learned that apparently their success was all due to their trousers and they were under the influence of tea in their later years.  Though it was done as a lovingly funny copy of the true Beatles story, it and the music were still great.  In 1978 with no new Beatles music since Let It Be in 1970 this was almost like getting a brand new album for Fab-starved fans.  That was the problem for the holder of the publishing of the real Beatles’ music at the time (ATV).  They sued writer Neil Innes for copying Beatles music and eventually received 50% of the royalties from Innes in an out of court settlement though he remained sole songwriter.

Another fictitious movie band from the 1984 metal parody This Is Spinal Tap.  The soundtrack album released for the movie showed the actors to have real musical talent.  Christopher Guest, Harry Shearer and lead singer Michael McKean do a credible psychedelic take-off on this song written by all three under the names Nigel Tufnel, Derek Smalls and David St. Hubbins.

3.The Heardsmen – She Knows It

Let’s make it a fake movie band troika with this fine song from the soundtrack to the spot-on film about a one-hit wonder ’60s U.S. band.  If Tom Hanks had never done another movie other than 1996’s That Thing You Do!, I would still love his work as this feels real and could only come from someone who loved the music.  Boy would I kill to talk to him about rock and roll one day (as if!).  The album included some nifty pop music that wasn’t actually in the movie such as this song by the fictitious Heardsmen which is the band that leader Jimmy supposedly formed after The Wonders act broke up in the movie.  The song is written by Scott Rogness and the late Rick Elias.

4.The Knickerbockers – Stick With Me

Though they had two other minor hits, this New Jersey band could very easily have been the true inspiration for the movie one hit Wonders.  In 1965 when “Lies” went to #20, folks wondered if they were really The Beatles.  The hit was written by band members Beau Charles and Buddy Randell (who had been in The Royal Teens of “Short Shorts” fame).  As an act they were chameleons sounding at times like The Four Seasons, but here doing a credible Beatles take-off.  Drummer Jimmy Walker replaced Bill Medley in The Righteous Brothers for a time.

After 14 years of inactivity, the New Jersey brothers Brian and Stephen Butler (the core of Smash Palace) recorded the album Fast, Long, Loud in 1999 which was available on the indie label Imagine.  In 1985 they had recorded for Epic with zero success and quit disillusioned with the biz.  The band is still going today under Steven’s leadership.  This song feels like the pre-Pepper Beatles.

A bit modern sounding, but a lovely dreamy ballad with a late-period Beatles feel.  This comes from the San Francisco band’s seventh album Specter At The Feast (2013).  The record was a bit of a mourning period for the loss of the father of their bassist who was also their producer and live soundman – Michael Been of the excellent band The Call.

The early Beatles played their guitars through Vox amps.  As the owner of a vintage Vox Buckingham amp from my youth, the name Vox holds special meaning for your blogger as well.  This band was an offshoot of the fine power-poppers The Rubinoos (“I Wanna Be Your Boyfriend”).  Of this band, only bassist/vocalist John Seabury is not a current member of The Rubinoos.  The other Vox Poppers were Tommy Dunbar (guitar, vocals), Al Chan (vocals, guitar) and Donn Spindt (drums, vocals).  This was recorded in 1990 and was on their self-titled indie album on Sandbox Records.

On their 1980 Bearsville album Deface The Music, Utopia set out to pay homage to the music of The Beatles.  Utopia was Todd Rundgren (guitar, vocals), Kasim Sulton (bass, vocals), Roger Powell (keyboards, vocals) and Willie Wilcox (drums, vocals).  Every song comes from a different Beatles era with “Take It Home” being a riff rocker like “Day Tripper”.

9.Emitt Rhodes – She’s Such A Beauty

With his band The Merry-Go-Round and as a solo act, Rhodes had a strong McCartney vibe and has been worshiped through the years by fans of pop music as a visionary (like Big Star) that never received the rewards he deserved.  He recorded his 1970 self-titled album much like Paul had playing all the music himself in his home studio.  This album yielded the minor Dunhill records hit “Fresh As A Daisy”.

What is a Spice Girl doing here you may well be asking.  Well, the lady has talent.  This jaunty piano-driven tune feels like something Paul would have written for the Pepper album.  It was a Rick Rubin production from her first solo album Northern Star (1999) which was a big success just about everywhere except the U.S.  The song was also used in the 2000 movie Maybe Baby.

His 1993 album from which this comes (The Greatest Living Englishman) is his best album, but he has been releasing fine music under his own name, with The Cleaners From Venus and with The Brotherhood Of Lizards since at least 1980.  Like XTC his music is a bit quirky with elements also taken from Pet Sounds era Beach Boys.  He has been prolific musically in England plus as an author and poet.

Well they mention “Pepper’s band” in the lyrics so you know where they are coming from stylistically here.  This 1977 song sounds nothing like any of the other songs of this English band and comes from their album Bright Lights & Back Alleys.  They recorded a decent cover of The Searchers hit “Needles & Pins” as well.  Their biggest hits were “Lay Back Into The Arms Of Someone” and “Living Next Door To Alice”.  Lead vocalist Chris Norman is no longer with the band.

13.Jellyfish – The King If Half-Undressed

Power pop fans need no introduction to the San Francisco band Jellyfish who were sort of a U.S. XTC.  This song is from their 1990 debut Bellybutton.  Releasing only two albums as a band, the core members Andy Sturmer, Roger Manning and Jason Falkner (who was not on their second album Spilt Milk) have been active in pop ever since.  Their music was hopelessly out of sync with the prevailing trends of hair metal balladry and grunge so they didn’t stand a chance.  Still this song charted at #39 in the U.K. which has always been more open to good guitar-based music it seems.

14.Kaiser George & The Hi-Risers – I’d Rather Be With You

Well this is probably cheating, but so what – I like this song.  Yes, in the last post we already included The Kaisers from Scotland, but this is only one of them (George Miller – far right in video) with the U.S. band The Hi-Risers.  Guitarist Greg Townson – far left – is now in my fave instro band Los Straitjackets (whose one-time drummer Jason Smay – 2nd from left – was also in The Hi-Risers and now JD McPherson’s band).  The album Transatlantic Dynamite! (Spinout Records 2006) was termed by one as “like mixing John Lennon with Buddy Holly’s Crickets”.

Take a thrasher by punk band The Germs and have it played on a tribute album by one of the great U.S. power-pop bands (The Posies) who give it a Rubber Soul sort of arrangement = brilliant pop music.  A Small Circle Of Friends (a Tribute album to The Germs) came out on Grass Records in 1996 and likely isn’t as well-known as some of the other Posies songs like “Golden Blunders” and “Flavor Of The Month”.  Aged only 22, the lead singer (Darby Crash) of The Germs killed himself in 1980 (one day before John Lennon was shot) with an intentional heroin overdose.

16.The Red Button – Caught In The Middle

Sounding just like the early John Lennon-style harmonica-driven Beatles sound, The Red Button released this song on their second album As Far As Yesterday Goes (2011).  They are a two man band U.S. power-pop act (Seth Swirsky and Mike Ruekberg).  Reading about them online, since I am too cheap to pay for Sirius radio, I did not realize that this song was popular on Little Steven’s Underground Garage show proving that some folks still like good pop.

Was gonna include the psych song “Invisible”,but this video is such a great pastiche of The Beatles a la The Rutles that it demanded inclusion.  Perhaps a bit of a cheat again to include the son of John here, but he didn’t have to do a pop song that sounded like his dad’s band – yet he did so thanks to him.  Sadly his dad never saw his successful career but at least his mother Cynthia did.  Well it helped that his voice sounds much like his dad’s, but during the mid ’80s into the ’90s he managed to have a good number of international hit records.  This was from his 1998 album Photograph Smile, his fifth.

Another John Lennon sound-alike though more like solo John.  English indie Arctic Monkeys finally broke into the U.S. with their fifth studio album AM (2013) which included this song.  Frontman Alex Turner is also in another band we may soon see on this list.

Told you we would see Alex Turner from Arctic Monkeys again – this time with his side-project which also includes Miles Kane whose music is worth seeking out as well.  Once again this sounds more like “Mind Games” Lennon, but still needs to be here.  This was on the 2016 album Everything You’ve Come To Expect.

Perhaps if George Harrison’s Eastern musical styles would have continued to Abbey Road we would have gotten a song like this along with orchestration.  Those old-folk in the reading audience will remember actress Hayley Mills from movies like Pollyanna.  The fact that she couldn’t sing didn’t stop her from having a hit with “Let’s Get Together” (#8 in 1961 from the first Parent Trap movie).  Luckily her son Crispian can sing and his band Kula Shaker have released sporadically some excellent music since 1995.  This was on the 1999 Peasants, Pigs & Astronauts album, their second.  As a U.K. single this got to #14.