A couple of weeks ago, Dr. and Mrs. Rock N. Roll Dentist returned from a 40th anniversary sojourn to London.  It has taken this long for your’s truly to recover from the crud gained from the 9 1/2 hour return flight on British Airways (thank you anonymous coughing teenager).   Not being a world traveler, I was lured to ‘Jolly Ole’ by the promise of seeing Beatles locales

while the wife wanted to see castles and jewels

.  Neither of us ended up disappointed with a splendid time had by all (including VISA which sent us a huge bill recently).

Arriving at Heathrow (well west of London proper), after buying passes (called Oyster Cards) to ride their subway – The Tube, one grabs a London Underground Tube Map and jumps on for a ride via the Piccadilly line.  A simple transfer to the District line at Hammersmith station took us to our destination of Victoria station.  After riding on these fast, efficient and well-marked trains one has to wonder why it is so difficult for the city of Denver to install a much simpler light rail system (but I digress).  Not for the first time after emerging from the Underground, we became disoriented as to the direction we needed to go – without the Colorado mountains it is frankly hard to tell west from east.  We managed to stumble the few blocks to our pleasant hotel (Hanover) where our trip was headquartered.

Spending extensive prep work at home with Frommer’s Easy Guide To London was extremely helpful in determining which museums we wanted to see and how to get to them.  Armed with the Tube map and Free Tourist map of London, we set out to see all the critical sites and frankly we did a pretty darn good job.  Many folks like the hop on/hop off bus, but we found the Tube to way far more user friendly and economical.  Of course we could have traveled in better comfort and style, but had to decline.

The Thames is a ubiquitous presence through town and is surprisingly muddy proving correct the excellent cover version of “Dirty Water” by the Inmates.

Later on our trip we ventured north the the Camden Market and where rewarded with jams of people and hundreds of stalls selling clothing, crafts, records and alot of food.  I would recommend this to anyone going as it was alot of fun – it is also critical to walk up the road as the best stalls are farther north.  We had some outstanding Malaysian food for 7 pounds and I bought 20 45s for 15 pounds.  This is where you mostly need local money as few took credit cards here (which is what we mostly used on the trip).  For that reason I suggest taking about 200 pounds.

Most of our time was spent on the north side of the Thames which can be easily traversed by several bridges if you want to see the south side.  This bridge afforded a nice view back of St. Paul’s Cathedral which they say is where Hitler concentrated alot of his Blitzkrieg in an attempt to demoralize the Brits.

On the Southbank we discovered that you can save alot of money by eating at outdoor food markets which was not only cheaper but tastier than restaurant food generally since you pay extra if dining in.

Mrs. R.N.R.D. managed to grab a lamb pita while your’s truly couldn’t finish the huge Korean burrito.  While at Greenwich I found a really nice used record store Music & Video Exchange at 23 Greenwich Church St. that had 25 pence 45s (about 34 cents!).  After seeing the locale of Greenwich Mean Time

and the Cutty Sark

we found another food market for some tasty Asian fare.

The most critical thing I wanted to do was to visit Waterloo at Sunset on Friday night in memory of the excellent Kinks song – mission accomplished.

While we took a guided walking tour of some of the Beatles London sites, frankly the biggest help was the book The Beatles’ London-A Guide To 467 Beatles Sites generously given to me by L. Pergeau one of my patients (thanks!).  We managed to find where the Beatles performed their rooftop concert Jan. 3o, 1969 at Apple headquarters 3 Saville Row which is now an Abercrombie & Fitch Kids store.

Marylebone Station was the location for the intro scenes to the movie A Hard Day’s Night.  Where they are running at the camera and George falls is to the right of the entrance and then when they enter the front it is a turn to the left. 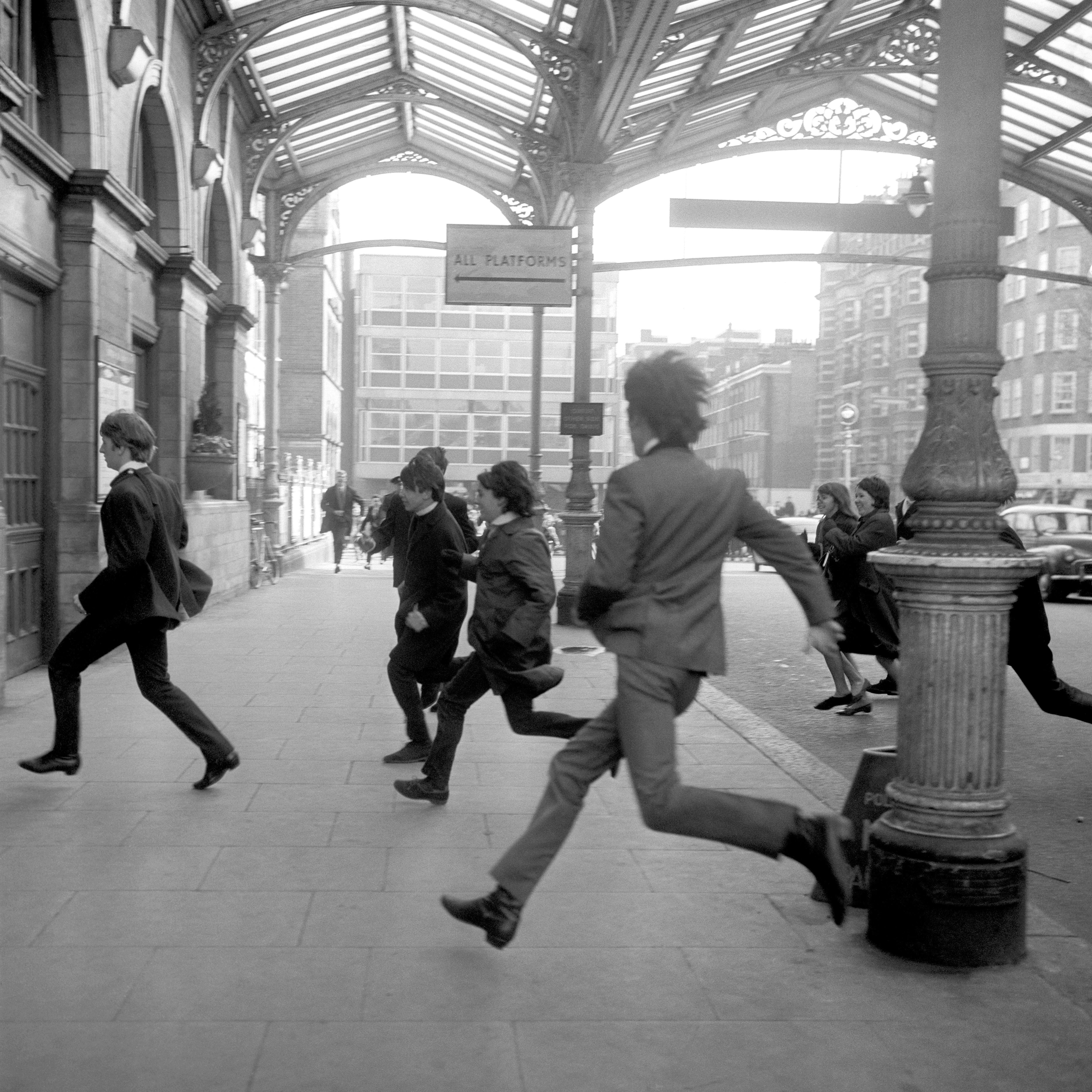 Recreating a couple of pictures was fun for me and using the book made it a snap.  John Lennon, for instance, appeared in a 1966 TV sketch in front of the entrance to a pay toilet.  Interestingly, it has changed a bit however it is still there on Broadwick at Hopkins St.

Another iconic Beatles picture was taken in July 1963 and used for their On Air – Live At The BBC Vol. 2 CD.  While the Guilford St. area has changed alot (at the northern tip of Russell Square), the shape of the upper level of the Hotel President has not and it gives away the location.

34 Montagu Square has had a colorful history beginning with Ringo leasing it in 1965.  Paul used it as a demo studio in 1966 then Jimi Hendrix shared it in 1967 with his manager Chas Chandler.  John and Yoko moved in the following year and filmed the Two Virgins naked cover inside. 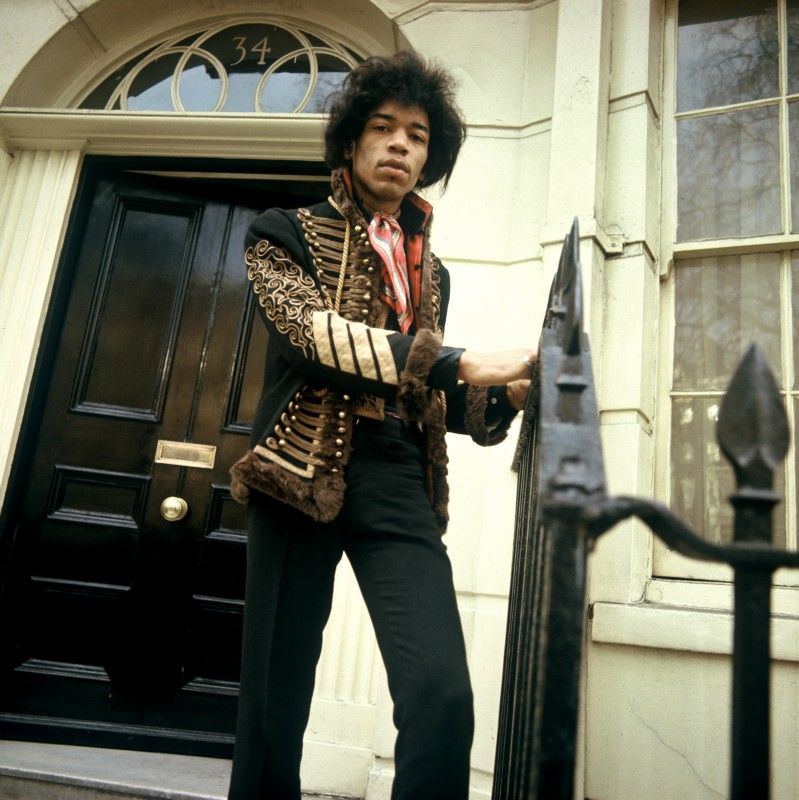 Of course the most iconic site in London for any Beatlemaniac is Abbey Road Studios which is not open to the public as it is still a working recording studio.  It is a short walk from the St. John’s Wood tube station which also reminds you of the lyrics to the Rolling Stones song “Play With Fire”.

Abbey Road is a very busy street and the constant stream of tourist recreating the Beatles famous album cover have to always look out for speeding cars coming from all directions.  The crosswalk is perhaps 20 feet to the left of the studio as you look from across the street.  Needless to say we took many pix of the studio exterior and each of us walking across. 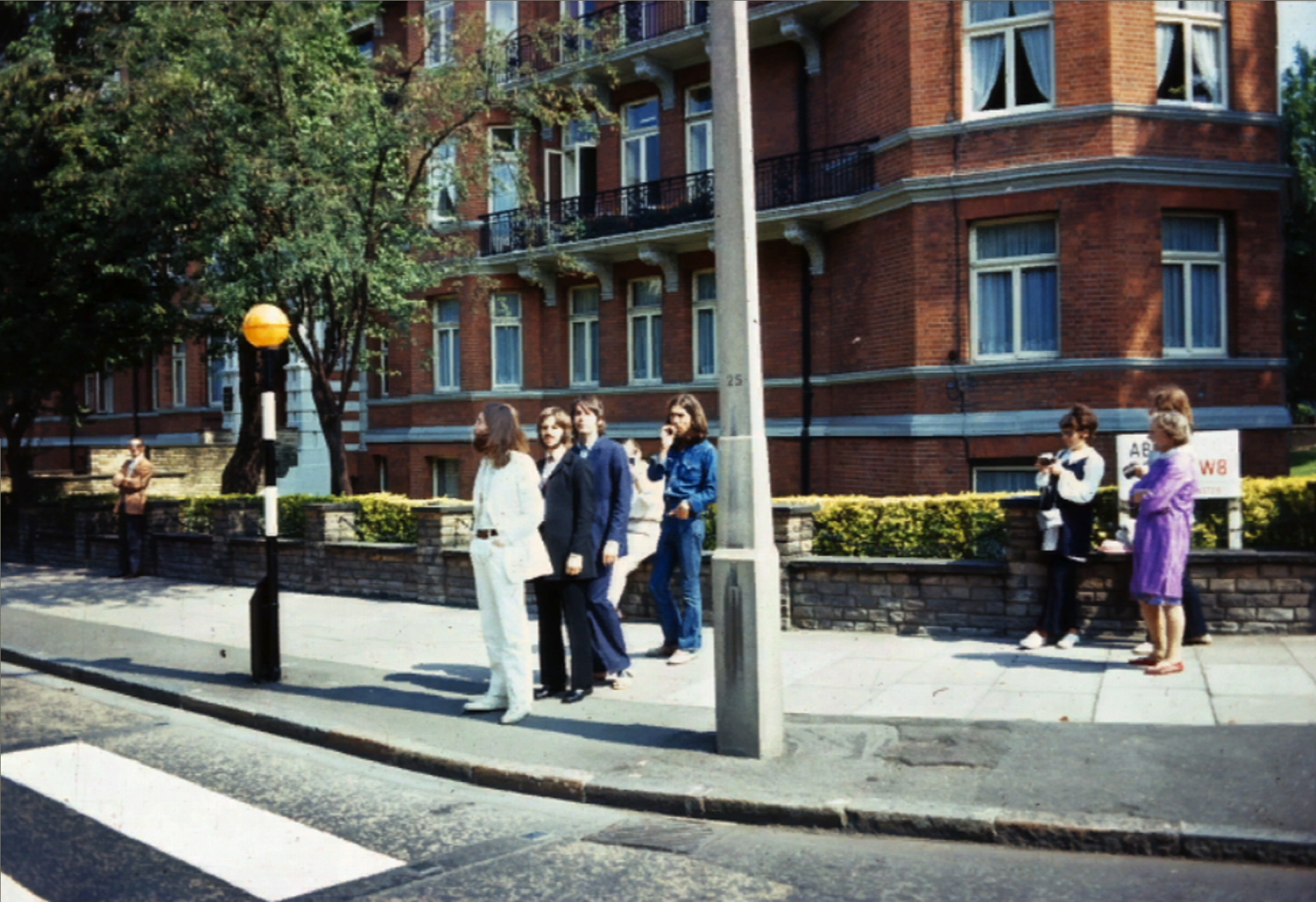 Here are some other random Beatles related photos.  While he was with Jane Asher, Paul lived in the upper level of the Asher residence at 57 Wimpole St (late 1963 to 1966).  To escape fans he would climb up the roof, run down to the right and then leave via the alley behind the house.  Of course I had to recreate the escape.

Paul and Jane then moved to a place fairly close to Abbey Road studios on 7 Cavendish Ave.  He apparently still owns it but didn’t invite us in.

The Indica Gallery was a basement art gallery with an upstairs bookstore funded in part by Paul.  It was in the art gallery that John went to see Yoko Ono’s exhibit and became smitten.  6 Masons Yard was hard to find which might be why the Beatles went there.  If one looks to the right of the steps leading to the basement, you see the green 13 Masons Yard, the former nightclub Scotch Of St. James where the Beatles had their own table.

The Bag O’ Nails was a club frequented by the Beatles as well and known as the place Paul first met his future wife Linda Eastman.  Jimi Hendrix played there as did Georgie Fame and many others.  It is still at 9 Kingly St. in Soho.

Sadly the building that housed the Apple Shop boutique at 94 Baker St. in early 1968 (that the Beatles had the Fool paint in psychedelic colors) has been torn down with only the location marked by a plaque on a building with the same dimensions.

Not terribly far from the Marylebone Station is the location of where Ringo married Barbara Bach (1981), Paul married Linda Eastman (1969) and Paul married Nancy Shevell (2011).  Apparently Liam Gallagher wed here twice and David Gilmour once as well.  The Marylebone Registry Office is at 181 Marylebone Rd.

As my sister Cheryl’s friend Debbie G. says, this was like visiting the motherland for music fans like us.  Here are just a few other non-Beatles related music items from the trip to see where so much of the music I love came from.  1.We went to an outstanding Organ Gala concert at the Royal Albert Hall, 2.Billy Fury (UK pop star who died too young) lived across the street from Paul McCartney at 1 Cavendish Ave., 3.as a kid my fave band was the Dave Clark 5 and they were always talking about them as being the ‘Tottenham Sound’, 4.Hermans Hermits weren’t a London band, but their song “Leaning On A Lamp Post” inspired a photo or 2, 5.Gerry Rafferty’s “Baker Street” also kept coming to mind. Oh and lest you think we have no culture, Strauss live just off Chinatown for a time as you can see.

Well thanks for reading my blog.  If you have made it this far you might as well look at a few  more random London pictures.  Till next time!